The Harry S. Truman Dam Visitor Center, one of only a handful of Class A visitor centers in the United States, sits atop Kaysinger Bluff and provides a spectacular view of Truman Dam and Reservoir. Exhibits within the visitor center provide information about the rich history of the Osage Arm of Lake of the Ozarks Valley from pre-civilization to modern-day. Waterfowl, bald eagles, and turkey vultures can routinely be observed from the observation deck.​ 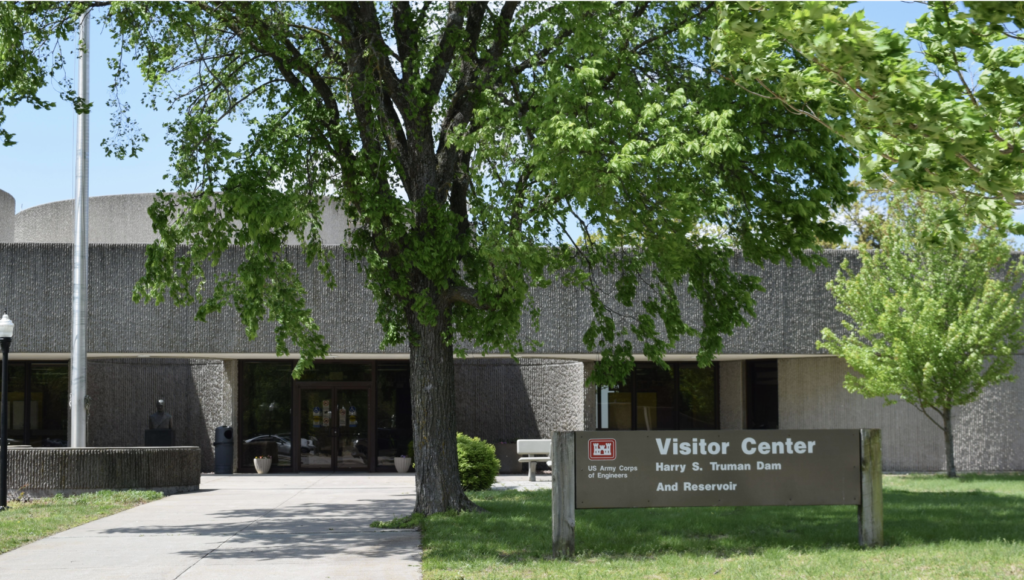 The architectural firm of Linscott, Haylett and Associates, AIA, of Kansas City, Missouri, designed the visitor center. Construction on the Truman Dam Visitor Center began in 1975 and was completed in 1977 by Miller-Stauch Construction Company of Kansas City, Kansas. Kaysinger Bluff provides a natural setting for the structure’s contemporary design, with the exterior and interior surface treatment developed to blend with the surroundings both in texture and color.​

Upon entering the building, a large map greets the visitor, showing the location of all park areas at Truman Reservoir. Visitor Attendants are on duty at the reception desk to answer questions about the project and lake area. Truman Lake Brochures and other informational pamphlets are available to visitors. Directly behind the information desk is an orientation and welcome video. The paintings on display in the building are by the late E.M “Ike” Parker. Exhibits on the main floor provide information on the lake area, Harry S. Truman, Partnerships, Living History, and westward expansion. Wildlife, history, and water safety videos are available by request for viewing in a 67-seat theater.

The rotunda area contains reproductions of archeological fossils and artifacts found in an area now covered by the waters of Truman Reservoir. On the south wall is a life-sized painting of the Missouri Leviathan,  a creature once thought by scientist Albert E. Koch to have roamed the area. Actually, the bones of this extinct “creature” were that of many Mastodons and other creatures that Koch discovered in the area in 1840. Ramps on each side of the rotunda leading to the observation deck. A social history timeline depicting the exploration and settlement of the Osage Arm of Lake of the Ozarks Valley is displayed on the north wall for viewing as visitors walk up the north ramp.​

Exhibits on the upper deck explain Truman Lake’s role in cultural history, wildlife, and environmental management, the operation of the powerhouse, Corps of Engineers Missions, and Construction of the Harry S. Truman Project. Views from the upper deck allow visitors to see both Truman Lake and the Lake of the Ozarks. Visitors get a sense of the construction and operation of Truman Dam, which separates the two lakes.​

Other items of interest within the Harry S. Truman Visitor Center Complex include a nature trail along Kaysinger Bluff (approximately 3/4 mile), the Hooper House and Barn, the Log Cabin complex, the Kaysinger General Store, and the Concord Schoolhouse located just off the Hooper House Trail.​