Welcome to the Barn Quilt Trail of Benton County, MO!

The mission of this trail is to increase visitation and awareness of the Benton County area by utilizing already existing agricultural assets! In the same way, the history and heritage of our area are highlighted by placing barn quilt squares to draw tourism.

In view of the fact that Benton County is known for our quilting businesses, this trail is a living piece of history. Each barn quilt square has a unique identity based on the owner and location of the barn. Additionally, you’ll find a history of the barn itself to add to the fun.

How the barn quilt trail came to be

Our committee of enthusiastic local individuals has worked diligently to secure barns for the beautiful quilt squares. This is alongside speaking with a local artist about utilizing her talent to do the squares, with the talented, Mrs. Kathie Kinkaid-Hubbard of Hubbard Holler.  (Hubbard has been doing these amazing barn quilt squares for many years.)

Moreover, the committee took great care to select the first 10 barns based on their history, heritage, agriculture, location and visibility from paved roads that are close to already existing assets throughout Benton County.

After applying for a grant through the MO Humanities Council for the first 10 squares, the dream has become a reality.  We are extremely grateful to them for providing the $2,000 grant to get this trail started.  Benton County Tourism & Recreation also committed $1,000 to this project. 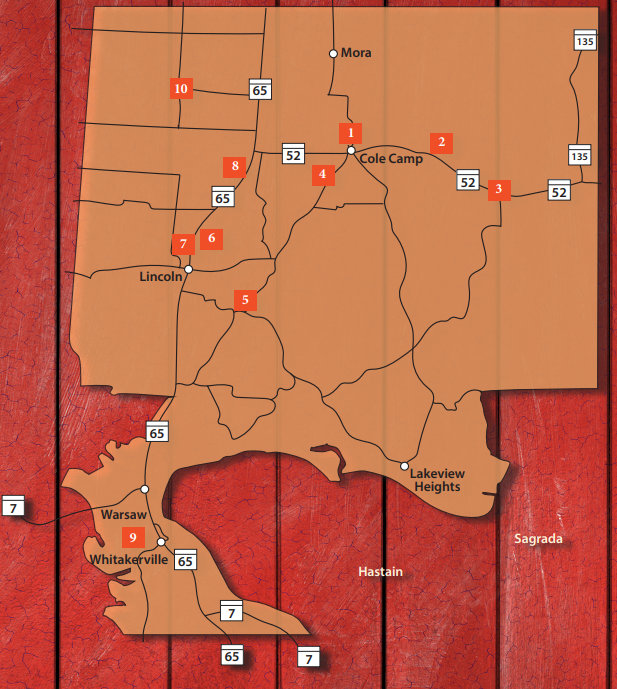 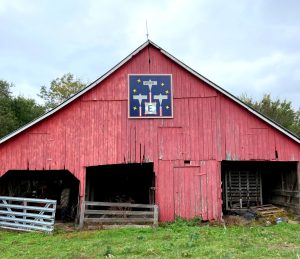 This barn was constructed by the Eickhoffs to house horses and probably a milk cow as many of the early residents had “mini” farmettes even in the city limits.

E.L. and Betty Eickhoff, owners of the barn, later used it for beef cattle and storage. When Benton County Tourism wanted to display a barn quilt on it, Wanda Brown wanted to design the quilt. She did, to honor E.L’s years as a pilot. Especially his service in WWII, flying the hump in China, which many times was a death sentence.

The center section of the barn was the original part of the barn. But E.L. added the lean-to on the North and South sides in the 1960’s to be used for hay storage.

For years this barn was known locally as the Bahrenberg Farm and where Harold (Barney) Bahrenberg and his sister Juanita grew up.

There is an interesting history tied to the acreage and area as it once belonged to Squire Frederick Behrens and his wife Margaret Bockelman, who operated a store. The two came from Louisiana in 1855. Interestingly, they had their store on the old farm, three miles east of Cole Camp. The supplies for the store was hauled from Boonville by oxen teams.

Squire Behrens served in the Union army in the original Benton County Hussars. He was injured and discharged in January, 1863. 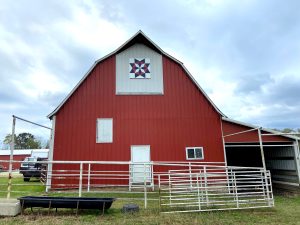 The Eckhoff farm has been in the family since 1919 when it was purchased by Diedrich Eckhoff. It became a Century Farm in 2019.  The barn was built in 1950 by Lawrence Eckhoff. Additionally, it served as storage for hay and grain and was also used for milking and feeding cattle.

Moreover, the farm helped to support twelve children that Lawrence and Elda raised.

Both mothers of Mrs. and Mrs. Eckhoff were quilters. Deborah’s mother Alice, worked at the quilting factory in Stover for years. During this time, she made a lot of personal quilts. 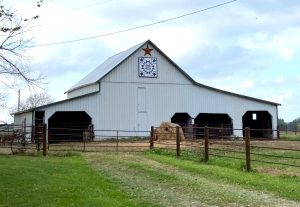 The house and barn, was originally constructed in the mid-1960s by Reno and Ruby Viebrock. When they acquired the land Reno moved the older home on the property across the road.  Then, they built the house and barn we see today.

When Reno and Ruby moved to town the property was acquired by the Otten family. This is now the home of Brent Otten and Tammy Schrader. The house has recently had a large update. The barn remains much as the way it was originally constructed. 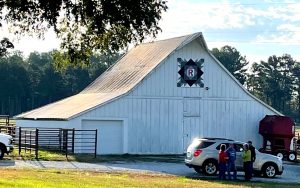 The farm was purchased in May of 2015 by the Richardson’s.  The purpose of the barn is for utilization of the calving process for Richardson Ranch to house registered Angus females and their newborn calves to prevent exposure to outdoor elements.

Over 80 years ago, Terri’s great-grandparents lived on this farm and used this barn for their dairy cows.

This pattern was selected because it reminds them of an Indian pattern and some of Terri’s family have Indian heritage. 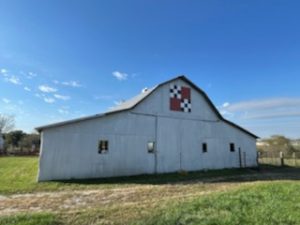 This barn has been in the Frisch family since 1959 with the original farmstead and land. These were purchased in the 1860’s by Mr. and Mrs. Frederick Mueller/Miller.  It was owned by numerous families prior to 1959.

Dennis and Judy Frisch have lived on he farm sine 1996 when they built a house.  They tore down the old farm house as it was in bad repair.  However, Mr. Frisch remembers the summer of 1963 when his brother, wife Patsy, and daughter Shelley Frisch Young, lived in the old house.  It had electricity, a bathroom and phone until the late 1960’s.

Dennis and his brother Gary Frisch both worked on the farm with their dad Clarence.  They raised Brangus Cattle.  The uses of the barn have always been for hay storage and feeding cattle.

Presently the farm is leased and is used for a cow/calf operation and for hay bailing in the summer.

The quilt pattern selected was a nine patch, which Dennis’ Grandmother Louise Frisch (Mrs. Oliver) made for Clarence Frisch and Stella Schnakenberg’s wedding in 1943. 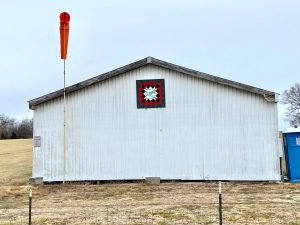 This airport is unique in that is one of the remaining grass strip airports in Missouri.  We celebrate an unusual and special event annually called the Lincoln Fly-In. At this event, pilots fly-in and the town welcomes them warmly with refreshments and food.  Pilots are able to utilize the airport any day of the year. 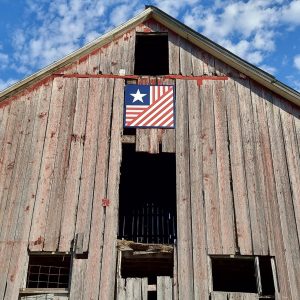 This barn is well over 100 years old and is a horse/hay barn, which has 4 stalls for horses, 2 tack rooms and a loft for the hay.  The Tolliver’s have owned the barn for 37 years. 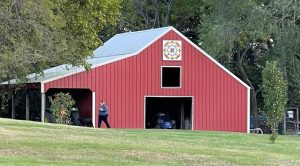 This barn was built in approximately 1928 and the farm has been in the family since 1926, owned originally by Roy and Anna Whitaker.  It was used as a sale barn for livestock in the 1930’s and 1940’s. 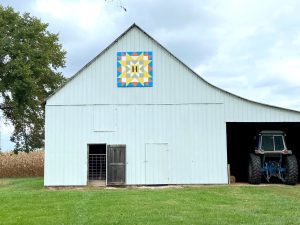 The farm has been in the family sine 1978 with the barn being built in 1860. It was used as a horse and hay barn.  Currently the farm is a working farm for crops.

The barn quilt square selected was because of its vibrant colors.

How to become part of the Benton County Barn Quilt Trail

If you are interested in being part of the Benton County barn quilt trail and having your own square, please contact Benton County Tourism at lstokes@visitbentoncomo.com or 660-438-2090 for more information.

There is a cost as all grant money has been disbursed at this time.  Please note that all quilt designs must be straight-line or approved by the committee for any custom designs (such as logos, etc).

The cost for a 3-5 color 4’x4′ is $200-$250 and a 6’x6′ up to 5 color is $400.  Logos, additional customization and colors are an additional cost, along with any designs that are not straight-line.  Hubbard Holler or Janet Manson are the artists doing the squares and can be contacted for a quote.  Additionally, artists may require a deposit before beginning work. 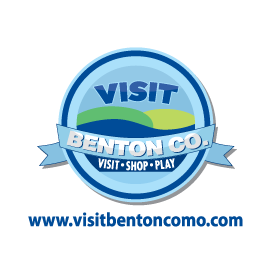